OCD Doesn’t Have to Dominate Your Life. Ketamine Treatments Could Help

Living with Obsessive Compulsive Disorder (OCD) and its associated symptoms, such as intrusive thoughts and repetitive or compulsive action, can feel overwhelming. You may feel a sense of frustration or even hopelessness if you’ve sought OCD treatment before but failed to respond. Thankfully, that doesn’t have to be the case. Recent research into the dissociative anesthetic ketamine has given medical providers a new way to potentially help people with OCD experience a more fulfilling life.

Could Ketamine be the Next Breakthrough for OCD?

OCD impacts the lives of up to 3 million U.S. adults annually.

While some OCD patients may benefit from traditional therapy involving antidepressants such as selective serotonin reuptake inhibitors (SSRIs) in conjunction with talk therapy, some people will not. For those who don’t experience relief, ketamine for OCD may be a promising treatment option.(1)

Ketamine is an anesthetic drug first developed in the 1960s and given FDA approval for human use in the 1970s. Known around the globe for its excellent safety profile, ketamine began gaining traction as an off-label (other than its FDA-approved usage) treatment for mental health conditions in the early 2000s.

What is OCD?Obsessive-compulsive disorder is a mental health condition characterized by unwanted and intrusive thoughts or compulsions. These can manifest physically as repetitive behaviors (such as obsessive hand-washing), ticks, and other uncontrollable actions. For some people, this obsessive behavior can have a significant, detrimental effect on their daily lives.(2)

What are Some Symptoms of OCD?OCD symptoms are often both physical and mental. Those suffering from the condition may experience frequent, unwanted thoughts and compulsions to perform certain tasks “on repeat”. Sometimes these compulsions can result in unintentional injury or intentional self-harm.(2)

Some OCD symptoms include:

What Causes OCD?There are many different theories within the medical community about the causes of obsessive-compulsive disorder. The consensus is that OCD symptoms can be triggered by chemical imbalances in the brain, underlying anxiety disorders, traumatic events, fears of loss, or other mental health conditions.(2) 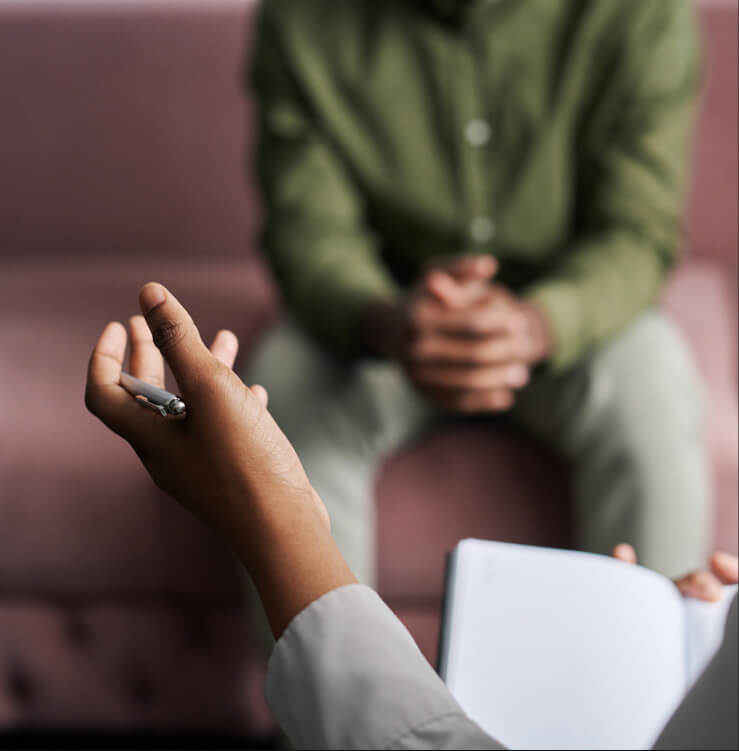 How Does Ketamine Therapy Help with OCD Symptoms?Ketamine may help to manage the symptoms of obsessive-compulsive disorder by impacting the brain’s glutamate system, specifically the N-methyl-D-aspartate (NMDA) receptor. The NMDA receptor is responsible for the uptake of glutamate, an important neurotransmitter partially responsible for regulating mood. Ketamine is an NMDA receptor antagonist, meaning it alters how the NMDA receptor interacts with glutamate. This altering action is critical to the drug’s anti-pain and anesthetic properties.(3)

Some medical professionals believe that an imbalance of glutamate in the brain may be partially responsible for conditions like OCD, depression, anxiety, PTSD, and more. Ketamine may help manage OCD symptoms, particularly by causing a temporary uptick in the levels of available glutamate which, in turn, is thought to increase brain neuroplasticity (the brain’s ability to form new neural connections). This neuroplasticity and synaptogenesis (creation of new synapses) are hypothesized to aid the reduction of OCD symptoms through the temporary increase in glutamate. While further research is needed, this could indicate that ketamine may have the potential to aid in certain symptoms associated with OCD.(3)

What are the Risks of Ketamine for OCD?Ketamine and its derivatives, like the nasal spray Spravato, are generally very safe. However, like any drug, they do carry some risks. Some conditions warrant caution while using ketamine, such as schizophrenia or high blood pressure. You should consult a physician to determine if ketamine treatments are safe for you.(5)

Some other short-term ketamine side effects include:(5)

Typically, ketamine’s felt side effects are short-term, usually only lasting for the duration of treatment. More research is needed to uncover the broad therapeutic effects of ketamine and how it compares to other mental health treatment modalities. Ketamine’s safety profile has led to it quickly being adopted as an alternative care method for depression, anxiety, and, importantly, OCD.(6)

Could Ketamine Help Manage OCD?Depending on your unique medical needs, ketamine could be a good choice for helping you with your obsessive-compulsive disorder symptoms. Schedule a consultation with a medical provider if you think ketamine treatment for OCD is right for you. Find a ketamine clinic near you to get started with your ketamine therapy.